That Was The Year That Was

A new year, and inevitably thoughts turn to what’s going to happen over the forthcoming months, as well as back at what was achieved in 2017.

I had two books out – treading on each others’ heels, it felt like – quite early on. Radix Omnium Malum & Other Incursions was a collection of horror tales from Parallel Universe Publications, while Damian Paladin – my 1930s, New York based occult detective and monster hunter – reappeared on the scene in the collection (or portmanteau novel, if you prefer), Walkers in Shadow, courtesy of Pro Se Productions. Paladin also made his presence felt in issue two of Occult Detective Quarterly in “The Black Tarot”; which was a backdoor way of introducing a new masked character to my fictional universe: the eponymous Black Tarot. Expect to see more of him in the future.

On the short story scene I had a Sherlock Holmes tale, “The Adventure of the Haunted Room”, published in the The MX Book of New Sherlock Holmes Stories Part VII: Eliminate the Impossible, and a science fiction short, “More Than Meets” in Nebula Rift vol.4 #11.

The middle of the year saw me drifting further into the world of Pulp fiction when I wrote a digest novel, The Griffon: Renaissance, for Pro Se. An updating (and well ahead of Doctor Who, a sex change) of the Arch Whitehouse character into a modern, shared universe, it involves plenty of intrigue, air battles and fire fights (all with technology just a shade more advanced than our own – well, it is Pulp adventure stuff). Great fun to write and, I hope, to read, when it’s published. 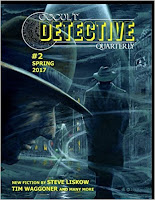 And for 2018? The above novel, fingers crossed, along with two more from Pro Se. There’s a post Civil War Western, Revenge is a Cold Pistol and if all goes well, a revised and expanded reprint of the first Paladin book, The Paladin Mandates. There are a couple more short stories due to see print – one SF, one Lovecraftian – and partway through a new Paladin story I realised that the experimental US submarine and crew I’d created would definitely be back in a later adventure, maybe even spun off into their own series. The Paladin universe expands apace. I also have a Holmes novella to finish – one set in the same Steampunk universe as Vallis Timoris – and a Fantasy novella to rewrite and update (which already got put back last year, so I need to focus), tentatively entitled Warriors of the Endless.

I’m sure that won’t be the end of it: life takes odd, unpredictable turns (this time last year, if you’d said I’d be writing a Griffon adventure, I’d have patted you on the head and advised taking more water with it). But for now, it’ll do.