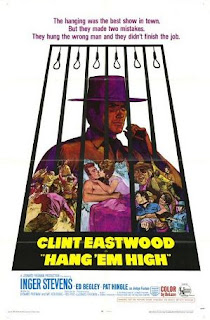 Watched the Clint Eastwood Western Hang ’Em High (1968) last night – only the second time I’ve seen it. The first time, some decades back, I was sorely disappointed; I think I was expecting something more like the Dollar films, or High Plains Drifter, while this offering is more traditional (although I’ve seen it described as revisionist, which I’d dispute). I thought I’d be fair and give it another go.

It’s not as bad as I remember it – but it’s a long way from good. With an almost 2 hour (sometimes too leisurely) running time it could benefit with at least half an hour snipped off. The mass hanging scene, especially, feels interminable. I appreciate the director wanting to convey some of the inappropriate carnival atmosphere such an event would have generated, but it could have been conveyed just as well – or maybe better – with the judicious application of scissors. The story line meanders too, and feels unfocused.

There’s a parade of familiar and famous faces – such as Dennis Hopper, Alan Hale Jr., Bruce Dern, James MacArthur and Ben Johnson – but too often they’re little more than extended cameos or filler material; their characters flitting across the screen in the service of Eastwood’s, then discarded as though the writer/director had grown bored with them. All Hopper is given to do is escape from a holding cell and get shot down in the street for his trouble – not exactly stretching his talents. And Johnson’s Marshal Bliss – after cutting down Eastwood's hanged but still living Jed Cooper and delivering him to Pat Hingle’s Judge Fenton – is written off in a couple of lines of dialogue (killed in a gun down, off-screen). Alan Hale Jr. fares little better. And the inevitable love interest, in the shape of Inger Stevens, feels just as incidental, her own tragedy denied any type of closure.

The film was, of course, an attempt to cash in on Eastwood’s rising star and, since he’d come to fame in an Italian Western trilogy, what better than to cast him in an American Western. At the time, Variety described it as “a poor American-made imitation of a poor Italian-made imitation of an American-made Western.” Which is a bit harsh (many Americans felt the Italian cinema was trampling all over a beloved art form and only the US should be allowed to make Westerns), but close to the truth. For a while Hollywood, recognising the box office appeal of so-called Spaghetti Westerns, tried to copy their style, with little success. It occurred to me that the film has a slightly unfinished feel to it, as though rushed out to capitalise on Eastwood’s name (after all, they probably weren’t to know he’d still be a major earner almost half a century later: movies and their audiences are fickle things). Judicious editing and overall tightening would make a better film – although still not a great one. Those were still in the future.
at September 16, 2017