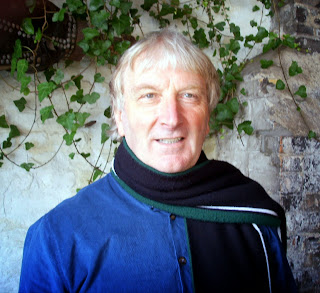 Would you like to briefly introduce yourself: what inspired your writing and when you began, and – if possible – of all of your published work could you tell me which your favourites are (and why)?
Adrian Cole, born 22nd July, 1949 in Devonport, Plymouth. I guess I was inspired to write through an early love of reading and a natural desire to (literally) put pen to paper. From Primary school onwards I always used to write essays (stories) that took up half an exercise book. I read all sorts as a kid, mostly adventure stuff and my first introduction to “classical” literature was thru reading most of the CLASSICS ILLUSTRATED comics! I started my first book when I was 19 (published five years later as THE DREAM LORDS trilogy) in 1968.
My favourite books of my own are MOORSTONES, which captures the mood and atmosphere of Dartmoor (where I grew up), A PLACE AMONG THE FALLEN, which broke new ground for me and NIGHT OF THE HEROES, which was just great fun to write.
Do you have a favourite genre, or sub-genre? What exactly is it that attracts you?
My favourite genres are Fantasy (to some extent) Horror, Spy Fiction and Ancient/Dark Age History. I like stuff to stretch the imagination and the Dark Age stuff is something I seem to have an affinity for, probably as I have “Celtic” antecedents, being from Devonian stock.
Some say Pulp is a genre, others a style; which side do you come down on?
I don’t think it would be right to call it a genre, as it comprises of loads of genres – crime, SF, fantasy, westerns, horror, S&S, etc., etc… It is more of a style, rooted in the Depression Era in the States, when dozens of writers hacked out stories for dimes, the mags printed on trashy pulp paper and sold very cheaply at a time when most people were eating their boots for breakfast. Perversely it does seem to have “evolved” a bit, but pulp today reflects the old style.
What was the inspiration for “Kiss the Day Goodbye”?
As a writer, I am ceaselessly caught out by the truly horrible: “Bugger it, someone has already written my latest brilliant story!” How many times have I come up with something hot, only to find out someone got there before me? If other writers are honest, they’ll tell you the same. I’m still peeved about the fact that George Lucas nicked my DREAM LORDS stuff as the basis for STAR WARS – my stuff came out first, by the way. So the Scene Stealer in “Kiss the Day Goodbye” was my answer to it. Only there must be more than one, because I’m still getting my brain picked…
Do you have a particular favourite author, or authors? What is it about their work which appeals to you?
Apart from lifelong favourites like Edgar Rice Burroughs, HP Lovecraft, JRR Tolkien and Robert E Howard, I particularly like Dan Simmons, Jonathan Carrol and Bernard Cornwell/John le Carré. The old gang were the very best at excitement and adventure and the modern writers combine superb storytelling with powerful, evocative writing that is not only exciting but moving.
Outside writing, what else occupies your time (assuming you have any free time left)?
From about March to November (weather permitting) I’m a bit of a beach bum and like nothing better than plunging into the waves at nearby Westward Ho beach – one of the best in the country. I also like cycling through the local woodland areas. For my indoors pursuits, I am an avid comic book fan (as well as doing a lot of reading) and love movies. And there’s the small matter (very small these days) of my favourite soccer club, Plymouth Argyle, whom I visit during the season. In the summer I’m hard of hearing, on account of my “surfer’s ear” and in the football season I’m hoarse from encouraging my team.
Is there any particular style of music – or musicians – which appeals to you?
Weaned on the Stones in their early years, then used to go to gigs very regularly – top bands for me were always Pink Floyd, Bowie, Deep Purple, Quo and then on to the electronic stuff like Kraftwerk and Tang Dream. New Order, too. Still like new stuff – e.g. Daft Punk.
What are you currently working on?
An ambitious three volume saga about an alternative Romano-Celtic Europe, which begins with the death of Augustus Caesar’s wife, Livia, in 2 AD and the murder of Claudius shortly afterwards at the age of 16. After that, things begin to drift right off the known historical map…
Also working on some new Nick Nightmare stuff, with a view to putting enough material together for his very own collection, NICK NIGHTMARE INVESTIGATES.
at November 20, 2013