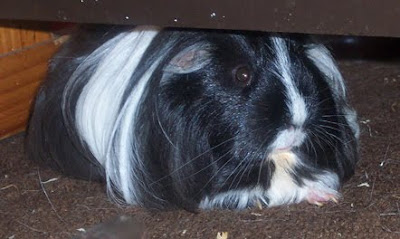 My wife and I have been keeping guinea pigs for years now - since before we married. We recently worked out that we've had 19 over the years. So you think it would get easier when they die; but of course it doesn't.
Around 2:20am Sunday morning one died. Named Pansy. We'd been given her in June 2008 because her original owner had a dog which had already attacked Pansy's sister, Petal (she was fine, luckily). Both were around nine months old then.
No idea what was wrong - she just went downhill rapidly, and was just too stressed to stay in her cage with her sister. So I took her out - at which point it was obvious she was fading - and knew I'd have to stay up until she died. Who knows which of us most needed the comfort.
She wasn't even the oldest animal. Another, Kitty - also given to us - is almost 7 years old and shows no sign of giving up. So now we're down to four guniea pigs - which means at least they have each other, once they've gotten over their own form of grieving.
at February 23, 2010