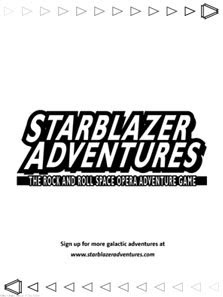 The Cubicle 7 RPG Starblazer Adventures - based around the old DC Thomson digest-sized comic Starblazer is due to start publishing supplements to the core - most SF - game. As someone who scripted over 20 issues of the much-missed comic, I agreed to give a hand, where I could.

Earlier this month, I got the call.

Flatteringly, I was told they intended to base much of the first Fantasy supplement on 5 of the issues that I'd written: a sword & sorcery soap opera featuring three generations of the d'Annemarc dynasty of Anglerre. Recurring characters, recurring themes - over the top in the extreme. First I provided a breakdown of characters, and then the storyline for the whole five issues (today we'd call it the story-arc). Of course, there wasn't an overall, continuous story for those issues - originally they weren't even written in the fictional chronological order; but I'd always been careful not to introduce too many contradictions, so it wasn't hard linking together stories that already kind of followed on anyway. 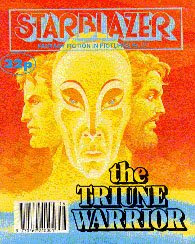 The fun part was filling in what had happened between issues (i.e. making it up!) to give a sense of changing geo-politics, and the march of time. And I admit I also tweaked some of the storylines to make them a better fit. What I hadn't anticipated was how long it would take me. I mean - each issue was only 60-odd pages long, two black & white panels per page ... just how much plot could there be...?

Okay - I probably provided more information than they needed, but to be honest, I was beginning to enjoy myself once I'd gotten back into the world the comics inhabited. The first couple of days I thought: "What am I doing with my life?" - but the ancient, siren call of magic swords, magic realms, gods and hideous demons eventually sucked me in. 15,000 words later, I was done.