It’s all happening as 2020 kicks off. No sooner is Stephen Jones’ THE LOVECRAFT SQUAD: RISING published, but Trevor Kennedy’s PHANTASMAGORIA magazine is running a special (#2, if we’re counting) based around the book and Lovecraft. Among its many delights will be a brief life and times of one Damian Paladin – which means I get to share cover billing with some quite delightful people. Probably be the one and only time, so I’d best make the most of it (and since it’s alphabetical, I get to be on top).

PHANTASMAGORIA #14 will also include my short story “Chasing the Dragon” (originally published in Emby Press’s SUPERHERO MONSTER HUNTER: THE GOOD FIGHT), and elsewhere in that issue there may even be some of my artwork. So don’t say you haven’t been warned.

Both mags will be available later in March, with an official launch at StokerCon, Scarborough, in April.

Also launching at StokerCon is THE ALCHEMY PRESS BOOK OF HORRORS 2: STRANGE STORIES AND WEIRD TALES. Damian Paladin – along with Leigh Oswin, Andy Raven, and Leo Saint-Germain – crop up, the proverbial bad pennies, in “Digging in the Dirt”: an indirect sequel to the “Hastur La Vista, Baby” crossover with Adrian Cole’s Nick Nightmare published in THE LOVECRAFT SQUAD: RISING. Almost as if it was planned (and if you believe that, you give me way too much credit). 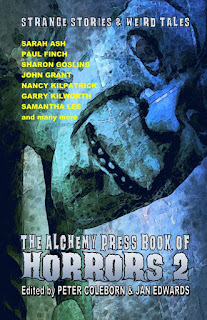