Martin is the author of "The Sons of Crystal City": a masked adventuter story for THE ALCHEMY PRESS BOOK OF PULP HEROES 2. 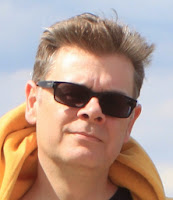