Marion Pitman contributed the Western "Meeting at the Silver Dollar" for THE ALCHEMY PRESS BOOK OF PULP HEROES 2. Here she slaps leather and trades shot for shot in a short interview. 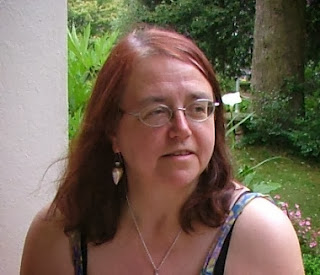 Would you like to briefly introduce yourself: what inspired your writing and when you began, and – if possible – of all of your published work could you tell me which your favourites are (and why)?
I’ve been telling myself stories ever since I can remember, and writing since I learned to write. I just have a need to tell stories. I think John Ford, asked which was his favourite of his films, said, “The next one.” I perhaps have a fondness for “The Seal Songs”, which I think was my first sale, and so far the most successful! I think it works well, and is well-constructed.
Do you have a favourite genre, or sub-genre? What exactly is it that attracts you?
I like all genres, and non-genre – it’s all stories, it’s all good. Anything with a sense of the extra dimension to the universe, the spiritual or whatever you like to call it, meaning and significance.
Some say Pulp is a genre, others a style; which side do you come down on?
Eesh, there’s a question. I think style. The subject matter can be anything, so I wouldn’t say it’s a genre. Mind you I’m very dubious about the whole genre thing anyway – as I said, it’s all stories, or should be. Genre is a marketing construct J. When I was a kid I read everything, I never thought about what genre it was.
What was the inspiration for “Meeting at the Silver Dollar”?
Well, the first thing was thinking, OK, what sort of thing is the editor looking for here? And I read the first book and decided that it was as much the concept of heroes as the pulp aspect. Then, I’ve been going through a re-immersion in the Western, which I adored as a kid, partly due to reading Harry Carey Jr’s memoirs about working with John Ford, COMPANY OF HEROES. Then I treated myself to a DVD of a rather bad movie called JOURNEY TO SHILOH, made from a rather good book by Will Henry. And then I thought for a bit, and various Western tropes and odd lines from movies came together and I wrote this story. Oh, there’s probably echoes of THE SHOOTIST as well.
Do you have a particular favourite author, or authors? What is it about their work which appeals to you?
Neil Gaiman’s high on my list, as he is on a lot of people’s. He writes about people you can relate to, and his world is rich and many-layered. Also he writes superbly and always with humour.
Other authors I read and re-read are Diana Wynne Jones, GK Chesterton, Dorothy L Sayers, Sarah Caudwell – all for much the same reasons: good writing, involving characters, a meaningful universe. And I still like CS Lewis, despite being aware of his faults.
Outside writing, what else occupies your time (assuming you have any free time left)?
Trying to earn a living, which involves selling second-hand books; watching cricket and rugby; interacting with friends (very important); travelling as much as I can afford. Reading, naturally. Trying to sing.
Is there any particular style of music – or musicians – which appeals to you?
Folk music has always been my favourite, leaning more towards the traditional. Also early music – 17th century and earlier. I also like classical, jazz, and some (by no means all!) rock music. Musicians – probably too many to mention.
What are you currently working on?
Couple of short stories, in the weird/fantasy/supernatural field, and a novel that I don’t know how to classify, which takes place partly in contemporary England and partly in another dimension, where one of the characters is mad, one’s been dead for years, and it kind of goes on like that. It’s good.
at November 26, 2013