Agents of SHEESH (with apologies)

I’ve been a fan of American comic-book superheroes for decades; in fact one of my earliest memories is of going on holiday, on a coach (we didn’t have a car at the time) reading a Green Lantern comic – over and over, as only young children can. I discovered Marvel comics several years later and became an instant convert to the garish, OTT universe its characters inhabited (at the time DC was definitely in the doldrums – despite having the lion’s share of the market – with repetitive and frequently boring storylines). These days I don’t hold a torch for either company – preferring individual characters (such as the Batman) or artists (like Howard Chaykin) over universes which are becoming mind-numbingly over-complex. When they’re not getting the far too frequent reinvention and clear-out treatment. But when movie technology finally caught up with the visual insanity of the comic-book worlds, I for one was delighted.
I think it’s fair to say that, in the movies anyway, Marvel is doing slightly better, with the separate X-Men, Spider-Man and Iron Man/Thor/Captain America franchises. The Batman and Superman films (all of the sequels and re-boots) have had their successes – but Green Lantern was, I’m sad to say, a disappointment (doubly so for me for, as a youngster, the Gil Kane illustrated Green Lantern and Carmine Infantino’s Flash were my favourite characters). Talk of a Justice League movie remains just that – talk – whilst Avengers Assemble has not only spawned a cartoon version, but has been spun out into the Joss Whedon produced Marvel’s Agents of SHIELD. Which is where everything gets flipped. 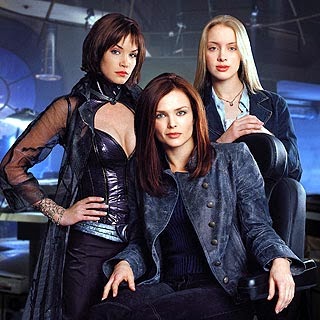 Over the past couple of decades there have been various attempts to get superheroes on TV. I won’t mention the Dr Strange and Captain America TV movies, both of which suffered from tiny budgets; nor do I intend to cover The Hulk or Wonder Woman (other than to say the first was simply The Fugitive all over again, and the second a camp throwback to the mid-60s Batman show). In the wake of the X-Men films there was a dire series named Mutant X which somehow managed to survive three seasons; whilst the DCU came up with Birds of Prey (based on the comic of the same name) which was cancelled before all of the first season was aired (don’t ask me why: it was far from perfect, but still superior to Mutant X) Some years earlier there had been a Flash TV series which only lasted one season even though it was quite fun and – unlike Hulk and Wonder Woman – actually had a few super villains (such as Mark Hamill’s Trickster). And of course Supes was represented by both The New Adventures of Superman (aka Lois and Clark) and Smallville, both of which had long runs and – in the case of Smallville anyway – did a good job of presenting a version of the DCU to a largely unfamiliar audience. Plus there were all the cartoon series: Spider-Man, Batman, Superman, Justice League, X-Men and the Avengers. 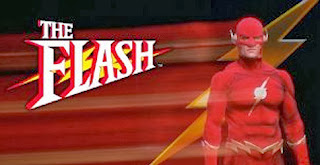 Notice something: with the exception of the animated series, nearly all of these shows are based on DC characters.
Which brings us up to the present day: the DCU represented by Arrow; Marvel by Agents of SHIELD. And what a difference. Whilst Marvel certainly has got into its stride with movies, they’re still lagging on TV.
Based on the Green Arrow comic book, Arrow seems to be more a spiritual twin to Christopher Nolan’s Dark Knight trilogy: shadowy, angst-filled – there’s even a budding Batman/James Gordon style relationship building in the second series between Arrow and the demoted policeman Quentin Lance. Although aiming less for the spandex look, there’s still an impressive roster of characters from the DCU: Deathstroke, Deadshot, Roy Harper (Oliver Queen’s younger sister, Thea, already has the nickname Speedy – so it’ll be intriguing to see where that goes); Black Canary has become an established part of season two, with the promise of Barry Allen/the Flash later. Although it’s occasionally a little too po-faced the series is confident, and clearly knows where it’s going. 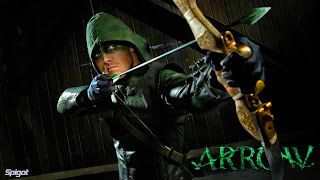 Agents of SHIELD, on the other hand, is so far suffering from what I can only see as a failure of nerve. Growing out of the crazy Marvel universe (in many ways a direct sequel to Avengers Assemble), with Joss Whedon at the helm I had expected so much more. SHIELD was Marvel’s answer to James Bond and The Man from UNCLE, and the comics were brash and OTT: operatives typically dressed in form-fitting one-piece suits, with shoulder holsters that held something far more exotic than a Glock automatic. They even have a flying aircraft carrier. So why, when AoS finally hit our screens is it so much like any number of other cops-with-fancy-technology shows? To be blunt, the hardware on display in CSI:NY was more fantastic than most of what Agent Coulson and his band of cyphers have so far encountered. It doesn’t matter how many times they name-check Captain America, this doesn’t feel like the same universe in which New York was invaded by a gang of other-dimensional creatures, master-minded by a Norse god, and involving a death-worshipping alien. It’s just too ordinary. Audiences in both the US and UK must feel the same, as viewing figures in both countries drop weekly. Unless things change, I don’t see AoS being picked up for a second season. 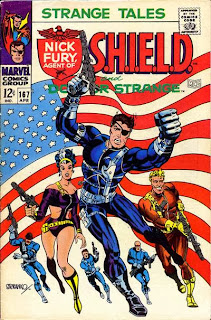 But maybe I’m being overly pessimistic. Recently I’ve started rewatching the first season of Babylon 5 – and I’m surprised at just how bad it is, with no sign of the heights it would attain in later years (ignoring the final series, which should never have been made). So perhaps AoS will make it yet; perhaps they’re still establishing the characters, and we may expect some real Marvel comic-book action. I hope so.

Bring back Hydra I say, introduce AIM (both have been name-checked either in the series or the films) – and let’s throw the automatic pistols away in favour of shoulder-holstered blasters, before it’s too late.