Bryn Fortey wrote "The Flier" which appears in the soon to be published THE ALCHEMY PRESS BOOK OF PULP HEROES 2. Here he answers questions on it and the deeper meanings of life: 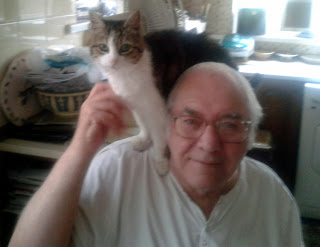 Would you like to briefly introduce yourself: what inspired your writing and when you began, and – if possible – of all of your published work could you tell me which your favourites are (and why)?
From childhood on it was always my intention to write, but mostly I just talked about it. Then one day I challenged myself, either do it or shut up. As it happened I sold the first story I wrote, though there have been many rejections since, but I was hooked. Personal favourites are “Shrewhampton North-East” (which virtually wrote itself and is probably as good as I get), “Playing From Memory” (which showed me I could make a fist at non-genre material), “Ithica Or Bust” (my comeback story after a period out of the loop, and the most light-hearted story I've written).
Do you have a favourite genre, or sub-genre? What exactly is it that attracts you?
Not being commercially/professionally minded, I write only for my own interest and look at possible markets afterwards. It is a matter of luck when something fits with a themed anthology. This being my attitude, I don't think in specific genre terms. I originally submitted to horror outlets because I usually killed off or did horrible things with/to characters. I read SF, horror, literary. I guess my favourite genre is quirky.
Some say Pulp is a genre, others a style; which side do you come down on?
I would say, inexpertly, that pulp is a time-related genre. The first PULP HEROES was full of different styles, as I'm sure No. 2 will be also.
What was the inspiration for “The Flier”?
"The Flier" could have been listed among my favourites in the first question, but I left it out to discuss it here. My late son had a big interest in all things UFO and we would often argue about the merits/demerits of individual cases. I briefly mapped out the skeleton of a story, under a different title then, which got shelved and forgotten in the aftermath of my bereavement. When PULP HEROES came out I remembered the story and felt it would have fitted. So fleshed out the original idea and gave it a more era related title for PULP HEROES 2.
Do you have a particular favourite author, or authors? What is it about their work which appeals to you?
Jack Kerouac, whose flowing tip-of-the-tongue prose never fails to excite. JG Ballard, personified all I liked in the New Wave SF that grew up around Moorcock's NEW WORLDS magazine. William Burroughs for his strangeness. Chuck Palahniuk for FIGHT CLUB if nothing else. I could go on, but my answers are too wordy by far.
Outside writing, what else occupies your time (assuming you have any free time left)?
Listening to music and the company of good friends.
Is there any particular style of music – or musicians – which appeals to you?
Blues, jazz, swing, ballads, rock. Howlin' Wolf, Muddy Waters, Louis Armstrong, Miles Davis, Chet Baker, Frank Sinatra, Nina Simone, Tom Waits, Leonard Cohen, Shirley Bassey, Charlie Parker, Lester Young, Count Basie, Oscar Peterson. I could go on and on.
What are you currently working on?
My debut collection: MERRY-GO-ROUND & OTHER STORIES: The Best of Bryn Fortey, to be published in 2014 by The Alchemy Press.
at October 21, 2013