From the roster of authors in THE ALCHEMY PRESS BOOK OF PULP HEROES 2,  Chico Kidd tells us a little about herself and her story, "Pandora's Box." 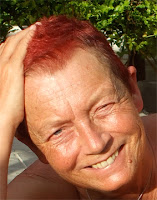 Would you like to briefly introduce yourself: what inspired your writing and when you began, and – if possible – of all of your published work could you tell me which your favourites are (and why)?
My first published story was in the style of MR James, as were nearly all my subsequent tales (including my first novel, THE PRINTER’S DEVIL) until 2001 when I was taken over by Captain da Silva. These narratives are influenced by many things: the Captain’s voice by Raymond Chandler, the humour by Joss Whedon, and more that I can’t single out. My favourite among my published works is the first da Silva novel, DEMON WEATHER (published last year by Booktrope).
Do you have a favourite genre, or sub-genre? What exactly is it that attracts you?

My favourite genre is the one I write in, dark fantasy. I like stories which mingle genres, such as SF, mysteries, fantasy. I’m also a fan of space opera, urban fantasy, hard-boiled ’tecs and some heroic fantasy. What attracts me to read and to write is unlimited imagination, whether in subject or plot.


Some say Pulp is a genre, others a style; which side do you come down on?
It’s a genre.
What was the inspiration for “Pandora’s Box”?

“Pandora’s Box” was written in the first flush of the Captain’s tales, when I was churning them out at a rate of knots. It’s a more straightforward narrative than some of the tales – a blend of several different things, a desire to give his wife an adventure of her own, wuxia movies, and I’m sure the moths came from somewhere in a different guise.


Do you have a particular favourite author, or authors? What is it about their work which appeals to you?


Outside writing, what else occupies your time (assuming you have any free time left)?


Is there any particular style of music – or musicians – which appeals to you?

From my misspent youth: the Beatles, the Who, Beach Boys, Queen, ABBA, Sting... I am a bit of a folkie: Steeleye Span, Fairport Convention, John Tams, Kate Rusby… And I like fado and opera…


What are you currently working on?

The second da Silva novel, THE WEREWOLF OF LISBON, has just gone to print. The fifth, UNCHARTED SEAS, is currently in progress. I have a number of half-written short stories on the go, and many ideas on scraps of paper all over my house.
at September 04, 2013