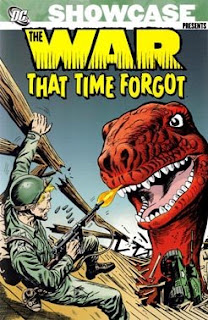 DC Comics’ Showcase Presents library is – let’s face it – an exercise in nostalgia. Something for those of us who remember the days when just about every newsagent had a revolving stand of US comic books and which – long before the rise of specialist outlets – were the only sources for your monthly Superman and Spider-Man.

The Showcase Presents books contain 500 pages of black and white reprints from DC’s past: Green Lantern, Atom, Metamorpho, Aquaman, Superman, and Justice League of among others – often in multiple volumes. For anyone who wants to revisit their childhood – or just to see what the Silver Age of comics was all about – it’s a cheap way to do it. But it can also be a chastening experience – a reminder that you really can’t go back…

The War That Time Forgot is a case in point. The title is an envelope term that covers a series of short comic strips originally published in Star-Spangled War Stories in the 1960s – off-kilter tales that sat oddly alongside your usual All-American gung-ho war comic. Mainly because instead of the Japanese, these GIs are taking on dinosaurs. And not just any old dinosaurs, either – these bruisers are huge! Maybe not Godzilla-sized proportions – but big enough to bite transporter planes in half, swallow submarines, rip tanks open like sardine tins, and shrug off clip-loads of .45 slugs like they were nothing.

And did I mention the robots…?

So are they as much fun as I remember? Perhaps unsurprisingly the answer has to be, on the whole, no. Even taken on their own, limited, merits most of the stories are repetitive and sorely lacking in imagination. The blame for that has to rest on Robert Kanigher who scripted every one in this volume (so perhaps we can be generous: who knows what his workload was back then; recycling the same plot may have been the only way to keep up). Generally, a bunch of GIs are sent on a mission and end up on an unmarked tropical island, chased constantly by a succession of oversized pterosaurs, marine lizards, fish, crabs, and a variety of sauropod and therapod dinosaurs. Often there’s a veritable army of both herbivore and carnivore dinosaurs who – ignoring their usual diet – are intent on swallowing humans who wouldn’t even constitute a morsel. Needless to say, all the herbivores are just as intent on eating men and machinery as their flesh-eating cousins. And to balance things up, there’s also a giant white gorilla – or even several giant white gorillas. Son of Kong, anyone?

Many of the characters seem cursed with selective memories, too (or maybe they’re just in denial). Early on in the series, characters find themselves back on the island (or back in time – it’s never entirely clear) with no memory of their last adventure there. But Kanigher obviously cottons on to this being one implausibility too many and he introduces running characters such as members of The Suicide Squad, The Flying Franks … and that robot I mentioned earlier. That’s right: a robot GI, named Joe (and a later model called Mac).

(Although not to be outdone, there’s also a Japanese robot that is – naturally – a giant. A precursor to the Transformers, perhaps? Pity he never gets to duke it out with one of the giant gorillas).

Okay – maybe I’m being too cynical; these all come from a more naïve age, after all. They were meant as simple entertainment – and I certainly lapped them up as a child (though I think even I baulked at a T-Rex and Apatosaurus having a prolonged fight under the ocean without coming up for air). And yes – there are stories here that I remember buying (or rather – my father buying for me): one concerning a were-dinosaur (seriously!) drawn by the wonderful Joe Kubert, and the other about a tyrannosaur with a taste for high explosives, illustrated by Gene Colon. Both come late in the run (the first TWtTF was published April/May 1960, and the last in this collection is dated August/September 1966), and Kanigher appears to have finally discovered a few more plotlines (or maybe it was just desperation – how else to explain a horror-obsessed GI becoming a T-Rex when the moon rises?).

Most of the art chores were handled by Ross Andru, with Russ Heath pencilling one story, and Gene Colon and Joe Kubert drawing two each. Personally, I prefer the Kubert and Colon art – with Heath coming in second (or should that be third?) his pencils are less dramatic than any of the others – but marginally more photo-realistic; in fact his style reminds me of the unfussy, nuts and bolts British style of artwork found in DC Thomson’s Commando and Fleetway’s long-gone Battle Picture Library. Andru’s art is fine – and he certainly had a way of defining muscle and scales on his creatures – but it just doesn’t have the haunting quality of Kubert or the sheer in your face impact of .

My final gripe is with the endless anachronisms (apart from dinosaurs and robots in the 1940s, of course). Turning up with relentless regularity are frogmen and helicopters. Now Jacques Cousteau didn’t help invent SCUBA gear until after the war had finished, and the only workable choppers during that period were German. I know they’re devices to keep a story that has a very limited number of pages moving – but let’s not push it.

The best way to approach this collection is in small bites – don’t try to take it all down in one go or you’ll lose patience long before the end. And you might be more forgiving of the many shortfalls. Just keep telling yourself they’re fifty years old and comics have changed in that lifetime.